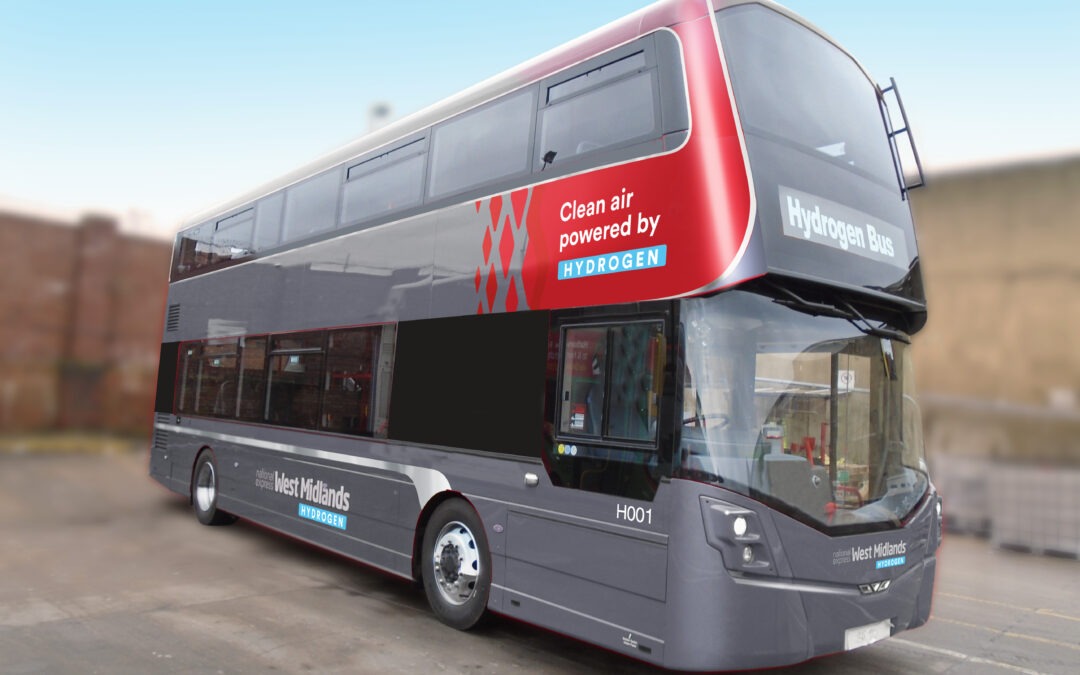 The Clean Air Hydrogen Bus Pilot looks to ‘kick-start’ the hydrogen market as a viable zero-emission fuel with the procurement and deployment of 20 hydrogen buses in Birmingham. The buses, which are made by Wrightbus and are the world’s first zero-emission hydrogen fuel-cell double deckers, will be introduced with National Express West Midlands from April 2021.

“It has taken us two years to get to a point where we can ensure commercial viability for this type of fuel cell technology and is great news for our city and the rest of the region.

“This pilot is a significant step towards our net zero carbon target and will provide Birmingham with a leading role in informing debate on supportive policies for zero emission public transport at a local and national level.”

It’s intended that pilot will be the catalyst for the next generation of hydrogen buses, hydrogen production and re-fuelling infrastructure development. The council have also collaborated with ITM, who will be producing and dispensing the hydrogen fuel from the new re-fuelling hub at Tyseley Energy Park.

David Horsfall, Director of Tyseley Energy Park said: “We are delighted to hear that the hydrogen busses that will be refuelling at Tyseley Energy Park are on track to arrive in 2021.  We have worked closely with Birmingham City Council and ITM Power to deliver the Low and Zero Carbon Refuelling Station which includes ITMs 3MW Power Proton Exchange Membrane electrolyser which splits water into hydrogen and oxygen meeting all requirements for Fuel Cell Electric Vehicles.

“The low and zero carbon refuelling station at Tyseley Energy Park also offers cleaner burning, drop-in alternative to diesel, a vehicle wash powered on renewable electricity and will soon dispense Bio Compressed Natural Gas, and commercial scale Electric Charging. Much of the infrastructure was funded by the Greater Birmingham & Solihull Local Enterprise Partnership (GBSLEP) including a new access road off the A45 that has become a catalyst for the wider regeneration of the area and has since led to the development of the Birmingham Energy Innovation Centre which is currently under construction.

“We are delighted to be paying a part in the delivery of hydrogen busses in Birmingham, supporting the introduction of the cities clean air zone and taking a major step toward reaching net zero by 2030.”

Hydrogen buses consume four times less fuel in comparison to standard diesel buses, covering 300 miles on a single tank and with the ability to refuel within 7-10 minutes. They emit water vapour, meaning no carbon dioxide or other harmful gases are being pumped in to the air.

Hailed as another solution to tackling the city’s poor air quality and a key step towards achieving the council’s net zero carbon target, each bus is expected to save up to 79.3 tons of carbon dioxide emissions per annum.

The buses are being manufactured by Wrightbus, who are also supplying vehicles to Aberdeen and London as a first in the deployment of hydrogen fuel cell double decker buses in the UK and within Europe. The buses will be operated in Birmingham by National Express, with an ambition to run them on the new Sprint route when it opens.

Jo Bamford, Owner and Chairman of Wrightbus said: “We’re incredibly proud that these buses hold the title of being the world’s first zero-emission hydrogen fuel-cell double deckers, and we’re delighted that Birmingham City Council has recognised the benefits that this technology can bring to the city.

“We have an opportunity with hydrogen-powered transport to make a huge difference to air quality.

“But this fleet of buses represents much more than Birmingham striving to reach a clean air, zero-carbon future. It represents the start of what could be a world-leading UK hydrogen economy which will bring with it multi-million-pound investments and tens of thousands of jobs.”

“By operating hydrogen double deckers in service in Birmingham, we will learn which routes lend themselves to hydrogen buses and what the mix of vehicles in our fleet should be going forward.

“These new buses will be fitted out in our top-spec Platinum range, so customers will also benefit from free Wi-Fi, USB chargers and extra legroom. Because there is no engine, they are super-quiet. And of course, all that comes out of the exhaust is water vapour.”

The development will see the start of fuel cell technology supply chains within the region and will help to support a brand-new service and maintenance apprenticeship programme.

GBSLEP’s Deputy Chair for Delivery, Chris Loughran said: “The team at Birmingham City Council have demonstrated real determination in reaching this milestone in what has been a difficult climate.

“This will not only make an important contribution to improving air quality for those living and working in the city, but it further augments the region’s growing low carbon and energy technologies sector. The buses will make use of the low emission re-fuelling infrastructure at Tyseley Energy Park, which GBSLEP is also proud to have supported via our Local Growth Fund.

“Our investments reflect our commitment to tackling one of the largest challenges we collectively face and to growing the region’s energy sector, which has enormous potential to generate new jobs and bring investment to the area.”

Once launched, the Clean Air Hydrogen Bus Pilot will be monitored and reviewed to analyse and ensure the ongoing commercial and operational viability of hydrogen buses, to enable a continued roll out of hydrogen fuel cell technology within bus fleets, as part of the city’s commitment to the environment and cleaner air.

This article was first published by the Birmingham City Council on Monday 5 October 2020.